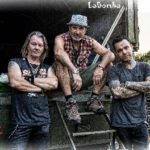 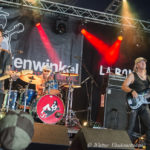 This is the high energy power trio of Maroen Franse, Peter Nelissen and Dave Bordeaux.

Besides Peter on drums and vocals the power trio has guitar virtuoso Maroen Franse on guitar and vocals and American Dutchman Dave Bordeaux on bass and vocals at the front of the stage. Dave is not the only link to the US. Maroen left Holland for LA at the age of 16 to study guitar at the famous GIT where Steve Vai and Eddy van Halen were among his teachers.The power trio will mostly play festivals and the better clubs. The trio has a sound that mixes influences by Gary Moore, SRV, Jeff Healey, Hendrikx, Gary Clark Jr., Cream, Triggerfinger and Seasick Steve.

In 2017 they will release their first record with their own material. Expect some serious footstomping grooves and songs with a bang and unexpected twists.