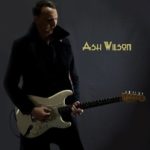 Drawn to the Blues music his parents introduced him to, (artists such as Muddy Waters, Son House, Eric Clapton and Albert King), It became obvious his ambition as a 14 year old was to become a great Artist like his heroes.

Early in his career he co-founded East Midlands based Blues band The Melt. He was 16. In three years of touring and opening for such acts as: Walter Trout, Mountain,  Doctor Feelgood and The Animals. The band released there critically acclaimed “self titled” album. Voted “debut album of the year by Blues In Britain magazine” Showing Ash at the age of 17 was already a gifted guitarist, vocalist and songwriter.

After a break in performing, Ash returned to being a live performer with alternative rock band Infamous Vampires. Co-founded with his brother Phil Wilson the band was created as a canvas for them to indulge in a darker setting and delve into a more complex place both lyrically and musically. The self titled album was released in May of 2014. Although the project was not a serious outfit it did see the start of Ash’s writing relationship with his brother Phil.

In 2014 he became a full time member of the Sean Webster Band. Being a part of Sean’s band Ash, working both as a rhythm and lead player transformed Sean’s live set and the well received album “see it through”

With all this outside activity, Ash has never written a solo album. But while honing his skills as a guitarist, songwriter and singer, he stockpiled ideas and songs he’d written for himself as well for, Sean Webster, The Melt, Jesse Davey. He selected songs and co-written songs with his brother for his Debut solo album, Broken Machine,

Since 2015, in the year following his daughters birth, Ash’s influences of life journeys and reflections manifest themselves in Broken Machine’s message and soul.

The coming release of Ash’s debut album featuring Phil Wilson on drums (Jesse Davey, Laurence Jones), Roger Inniss on Bass (Chaka Khan, Laurence Jones) and Bob Fridzema on Keys (KING KING, Dana Fuchs) Also appearing on Broken Machine is Jesse Davey (The Hoax) on the song “The Hitcher”. Is a watershed achievement for Ash Wilson, both in terms of the many musical styles in the tracks, which begin and end with the blues at its core, with the explorations and growth of him as a singer, songwriter and guitarist. Resulting in the spiritual growth expressed through the medium of his music.