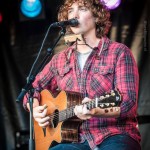 Dan started playing and gigging in pubs and bars in the UK with his sister when he was 13 . When he was only 17 studying to be an instrument/guitar builder he had an incident that damaged the eyesight in one of his eyes an that ended that career….but fueled his musical inspirations. He discovered he had a unique and powerfull voice and at the age of 19 he was recorded on video at a festival in the UK with “The ballad of Hollis Brown”, A Bob Dylan song. Within a few weeks that video was viewed over 500.000 times and things really got into gear for him.  At this point, although young, he was fully into the blues. One of the people that discovered him was Mick Fleetwood. They met and Mick became a mentor in the beginning of Dan’s career.

Now, at the age of only 24 he is signed to Atlantic Records worldwide, he has toured with Birdie on her European tour, he supported Kaleo on their European Tour, He played Paradiso in Amsterdam 5 times already, he played the Zwarte Cross Festival in Holland twice and toured the UK and Ireland throughout 2016. He has also played Glastonbury and many festivals in Europe the last few years.

In 2017 his new EP and single will be coming out and he will tour Europe on his own, starting in March.