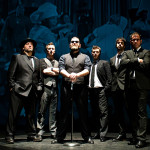 These musical friends from the Basque region around Bilbao have been making music with their big band for many years. As a side project they formed their 6 piece blues band. Yes there are two brothers in the band (bass and guitar) but the whole band operates and plays like a tight family.

They grab any audience within seconds with their passion, and great music. As they say: “love, joy and happiness”. The band toured the US, UK and since they won the European Blues Challenge in 2015 they played every major blues festival and many jazz festivals in Europe. At present they are the most succesfull blues band in Europa. Outrunning everyone in gigs, record sales and bookings.

Expect the party to start when Travellin’Brothers get on stage. Working on their next album to be released this year this is a band that you have to see at least once in your life.